Niantic's Pokémon Go team just announced that they have launched a new graphic engine for Pokemon Go with "Cutting-Edge" 8-bit graphics which is approximately twice the definition of 4K which has chunky squares with realistic and unbelievable definition. Niantic announced this with a post in their own website and with a news message via Pokémon Go app. 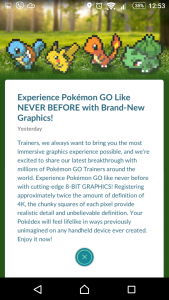 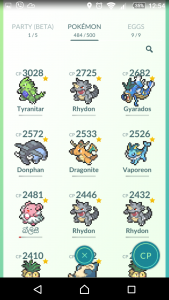 After this announcement, trainers noticed that their Pokédex is replaced with "Cutting-Edge" 8-bit graphics. Nicantic is calling this as their brand-new feature in Pokémon Go. 8-bit graphics will only replace the Pokédex and all other graphics will be as usual.

This is a April Fools joke by Niantic and it is not going to be a permanent "brand-new feature".

needs to be real

I really wish you could turn this on and off. Gym battles and Raids in 8-Bit would be AWESOME!!!

Nice joke, bring back my good graphics! I was terrified this was permanent! Lol!

[img]https://pbs.twimg.com/media/DZqx4B-WAAAsrI_.jpg [/img]
Look at that Snorlax

On 2nd of April

But when will it back ?

April fool huh .
I really got fooled
Happy april fool
With love
Pokemon go for ever